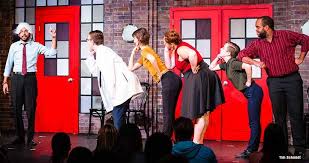 Readers might be a little surprised about the concept of Improv In Selling. Some would reflect on how overly scripted sales conversations are. We are trained to follow the script, not deviating, even if that’s not what the customer cares about.

Others would laugh at the concept of improv, saying that sales people are always winging it, shooting from the lip. They would excuse this, suggesting, “we’ve been involved in 100s to 1000s of calls, we can handle everything.” And, usually, they fail.

Some would be somewhere in between, suggesting we have to follow the process and never deviate. So while we aren’t scripted, there is a very strict process we have to comply with the process.

But high performing sales people, are masters of high impact improv in connecting effectively with their customers.

This morning, I was talking to an old friend. We worked together about 25 years ago. He was a sales executive (working with my wife). While we worked with different companies, we talked about business frequently.

We were catching up and he started talking about his passion for music. One of his passions is teaching children music, another passion is performing with a jazz band that is, largely improv. We talked about how he was trying to marry those passions helping children feel free enough to be improvisational when they play in groups.

I’ll stop here, there’s a lot more around improv, one of the best books I’ve read is Improv Wisdom by Patricia Madson.

Great selling is a lot like great improv. While a basic engagement process underlies all our engagement strategies, great sellers are nimble, they don’t abandon the process, but they adapt the process to the situation, the customer, and the specific context of the customer.

Great sellers are masters of the basics and fundamentals of selling, value creation, and their customers’ businesses/markets/industries. This knowledge is fundamental to their ability to adapt and build meaning in their engagement process.

Great sellers don’t focus just on their goals, but on they and their customers achieving their shared goals. They know their success is based on the customers’ success.

Great sellers listen, engage, adapt. They build the conversation, meaning and value for the people they work with.

Great sellers build and strengthen their colleagues and customers in the engagement process.

Great improv, whether in the arts or in business and selling requires deep expertise, constant practice, constant learning, deep listening, and caring for those with whom you are “performing.”