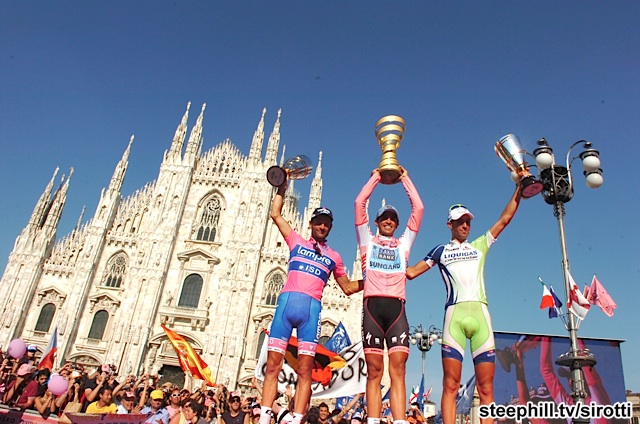 For those of you who have followed me for some time, you know I’m an avid bicyclist.  Over the past weeks, I’ve been watching some of my favorite bicycling events.  These are events–usually at least a week long, mostly several weeks.  Typically, more than 100 riders may cover up to 2000 miles over the race.

It may be surprising, but the margin of victory for these long distances and weeks of riding is extraordinarily small.  In the recent Tour de California, Chris Horner beat Levi Leipheimer by 38 seconds–0.04%.  The difference between Chris’s performance and the 5th place rider was 0.23%.   Alberto Contador won the Giro D’Italia by performing 0.12% better than the second place finisher.

Wins in cycling are measured in fractions of percentage differences.  The riders look for the smallest edge–a more aerodynamic position on the bike, better conditioning, tougher training schedule, a half percent improvement in power output, losing an extra pound, a sharper team strategy.  They know the race will be won by lots of small differences–but in the end, just enough to be the competition.

It’s rare, unless someone has made a major sales blunder, for there to be significant differences in solution capabilities.  There are seldom “slam dunk” big differences and wins.   Intuitively, it makes sense–we watch our competition closely, we continue to enhance our products, getting a little edge here, another there, sometimes the competitors surpass us in a few areas.  Ultimately, in most B2B markets, the margin of winning is very small–little differences here and there, slight perception differences.

The difference between winning and losing can be very small–each moment counts.  If winning ends up being a collection of small differences in performance, sharp execution is critical on the part of sales–we can’t afford to go to a meeting unprepared, we have to get the most out of each interaction with the customer. we have to at every opportunity show small differences–whether it’s our responsiveness over the phone, showing up for a meeting in time, a professional proposal and presentation.  It may be being a little bit easier to do business with, the customer feeling a little better about your company than the competition.

When I look at top performers, it’s clear they recognize that–they make sure they are prepared, they prepare everyone in their company who may be involved in winning, they carefully plan and execute each part of their sales strategy, they never take anything for granted.  Top sales performers, like top cyclists know they are dependent on their team–they know they can’t win without the support of their team and each person performing at the highest level.  But they also know that it’s their own individual performance as well–they must be at the very top of their game.  The top performing cyclists are among those who have trained the hardest for the longest time.  Likewise, top performing sales people are those constantly focusing on improving themselves–not satisfied with being good, but knowing they need to be better–than everyone else.  They know that in the end, its the small differences that count–and they don’t leave anything to chance.

Are you focused on the details?  Do you put your best foot forward in every single situation?  Are you providing the leadership to those who support you–making sure each one of them is performing at the highest level?

In the end, the difference between winning and losing is very small, can you afford to do anything but perform at the very highest level possible?