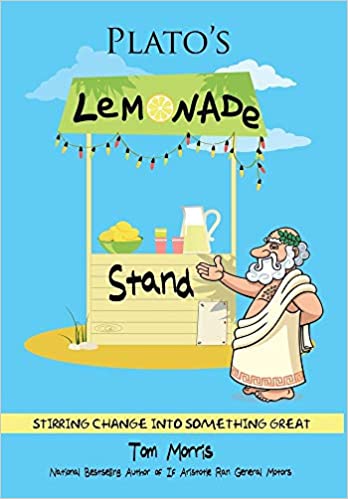 The first Saturday every month, my friend/mentor, Ned Miller and I have a conversation. There’s no agenda, it’s a mix of light conversation along with, “what do you think about…..,” or “how do we drive massive change in this area…..” The conversation is always about an hour, always, I have a lot to think about after the discussion.

This morning, a third person joined us, Tom Morris. Ned had been having similar discussions with Tom and invited Tom to join us this morning. I had been aware of Tom, he’s a prolific writer. Several people have suggested I download his books. Tom is a “public philosopher.”

Anyway, our conversation was one of the most fun conversations I’ve had in some time. It was one of those where one person starts with an idea, the next takes it to the next level, and the next takes it further….. We iterated on all sorts of ideas, things we were experiencing, ideas we had, observations about what’s right and wrong in business, sales, world affairs, and so forth.

The hour flew by, we stretched it to 90 minutes and had to stop, we each had Saturday errands. I took 3 pages of notes, ended up downloading half a dozen books, including 3 of Tom’s. (He thanked me and was very appreciative……”With the royalties I’ll get, I can afford to upgrade my normal PB and J sandwich to Crunchy Peanut Butter! By that time, I had gotten to know Tom’s rich sense of humor).

I found myself obsessed with the discussion. I started watching some of Tom’s YouTube presentations. (I encourage you to watch, Tom Morris on True Success, as a starter).

We are all on quests for greatness and making a difference. We are curious to about growth, success, happiness, creating meaning/purpose, fulfillment. Self improvement, business improvement books are always the top sellers. We spend $100’s on workshops conducted by the latest, most fashionable guru’s.

But the secrets to these are not really so secret, we’ve known them for years, centuries, even millennia. We just haven’t recognized this, instead search for new answers.

I’ve known, or at least suspected this for years. Tom brought it to life, both in our conversation and in his books. I’m spending this weekend relearning, what others have learned and shared for millennia and seeing them through Tom’s brilliant writing/speaking.

Take some time to look at Tom’s work. It will be time well invested!

Thanks Ned and Tom for a fascinating discussion! Look forward to the next time!