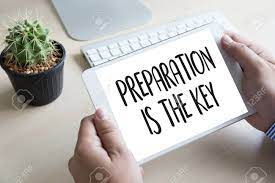 Today, I participated in a pretty important Zoom meeting. It was an important meeting in moving a very large deal forward. Several organizations are involved, collaborating on a solution for a very large company.

We had agreed on the agenda and objectives for the meeting. Several people had agreed to lead parts of the conversation. Our overall goal was to agree on the strategy and how we could create the greatest value in a series of meetings with the customer.

The meeting started well, each person had prepared, we had very good conversations about how we needed to tune our approach and what might be most important in our meeting with the customer. Until we reached one person. He started, at least he was honest, with the statement, “I didn’t take the time to prepare for this meeting…. But here are some thoughts……” He went on, and on, and on….. He took 30 minutes to talk about a number of things he was guessing might be important to the situation. Little of it was relevant, because, he had no understanding of the situation and what we were trying to achieve. He was just shooting from the lip based on what he had heard earlier in the meeting.

I realized I had wasted 30 minutes of my life listening to this person–as had 9 other people participating in this meeting, 5 hours of wasted time.

One of the nice things about Zoom is that we can send private messages to the participants. As this individual droned on, several of us were messaging each other; “Can you believe this…….” “What the hell is he talking about…..” “How does this connect to what we are trying to do….” “Do we even need his team participating in this deal…..”

I wish this was unusual, but too often, I see sales people unprepared for the conversation. Sometimes, sales people think they can “fake it.” After all, they may have participated in 100’s of similar calls/meetings in the past. They are smart and can shoot from the lip.

While they may be unconscious of how poorly they are performing, how poorly they are representing themselves and their companies; customers get it. Sadly, they see it too frequently and see too many sales people unprepared to carry on their part of the conversation. Customers actively are seeking to minimize sales involvement in their buying processes–they have better alternatives to learn. They are choosing to leverage sales people only when there is no alternative.

The interesting thing is that customers are agnostic on learning channels. If they can learn what they need to learn, effectively and efficiently, from a sales person, they are delighted to work with the sales person. If they can do it some other way, they will do that.

As we look at customer preference for non-sales channels, we are forced to ask ourselves, “Have we driven them away? Due to our lack of preparation, our inability to create differentiated value with the customer, are we driving them to other learning sources?”

If we expect our customers to be prepared, if we expect them to be able to answer our questions, do engage with us, don’t we owe them the same?

As to that sales opportunity, we’re one member of the team down. But he taught us that we really didn’t need him……