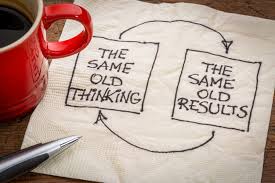 I’m a great fan of Jeffrey Phillips writing on all aspects of innovation. Recently, he wrote an intriguing post, Will You Shape Innovation Or Will It Shape You? It’s fascinating and a few sentences in the middle of the post struck me, getting my mind spinning on a question for sellers, “Have we become complacent?”

Since we are approaching year-end, it’s often a time to sit back and reflect. Think about the issue and your own selling organizations.

We have plenty of evidence that might indicate we have, perhaps unwittingly, become complacent.

And we were kinda-sorta successful!

We settled into doing the same things, even though those same things were showing they were less and less effective.

The warning signs have been there for years, but we somehow didn’t pay attention to them. Year over year decreases in employee engagement, decreases in tenure, decreases in percent of people achieving goals. Customers are no longer responding to our outreach, expressing preference for rep-free buying, even though their satisfaction is likely to be very low.

Just think about that last sentence. The preference for rep-free buying has skyrocketed, even though customers know the probability of dissatisfaction with these decisions will be higher. What have we sellers done that cause buyers to find that more preferable?

All the signs of things being broken have been increasing for years. Yet we continue to do the same things, we don’t change. And largely because of the economy, not selling excellence, we make our numbers—until recently.

Have we become complacent?

Actually, when we take a longer look at business history, recessions and other economic disruptions have been times of great innovation and change. People/organizations tend to wake up and recognize they are forced to change. New models appear (much of what we have become so complacent in doing today came out of the last downturn).

We have this massive wake up call! It’s something that impacts virtually everyone and every organization. We aren’t alone, the relative risk of rethinking things, changing, and innovating is relatively low. There is enormous air cover in the fact that everyone is facing the same economic conditions.

We only have to have the courage to recognize our complacency, and begin to rethink what we do and how we do it. And since we aren’t alone, we can do this rethinking with others. We have the opportunity to innovate with our customers, in our ecosystems, across different functions in the organization.

We, also, can take comfort by recognizing that a small number of organizations have constantly been innovating, adapting and changing. We can learn from them–perhaps not copying what they do but learning about innovation and change, artfully plagiarizing and adapting to our own markets and organizations.

As you reflect on this, don’t beat yourself up too much about falling into complacency. You have been in good company. But recognize the tremendous opportunity you have to adapt, change, experiment and do things differently!

What a fascinating opportunity each of us has to transform our organizations and our relationships with customers/partners/our people! I can’t imagine a more exciting time!

Afterword: In the past few years we’ve been fortunate to work with a number of organization in helping them and their customers innovate. If you are considering this, please reach out and ask us how people are doing this. We’re glad to share what we’ve learned. We’ve also developed some tools and methods to help accelerate your innovation process.