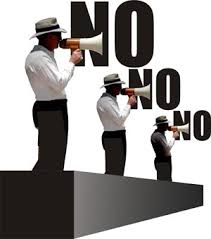 My friend Brian MacIver added a brilliant comment to my post “On Consensus Buying.” I’m shamelessly taking his idea on identifying “Who said no,” and expanding on it.

Let me back up. We know some things to be true about modern complex B2B buying.

Now here’s the interesting part about consensus that Brian makes vividly clear. Consensus is not about everyone saying, “Yes,” it’s that no one said, “No.” If no one says, “No,” then we have consensus.

But now, we have to dive in to understand the consensus building process. We focus on getting the buying team to say “Yes,” choosing us. But that’s only a small part of the consensus building process. As a result, the person/people that say “No,” may not even be saying No regarding a vendor selection, they may be saying No to something else involved in the decision. It may be about the risk. It may be they have a different view of the priorities around the decision or even the scope of the problem the team is seeking to address.

There are dozens of areas, where “consensus” can break down in the problem solving/buying process. If there isn’t consensus in what the group is trying to achieve, what success means, the scope and goals of the project. If there isn’t consensus on the the broader issues the team members need to address (not just vendor selection). If team members shift their priorities, focusing on other things.

We tend to focus only on one aspect of what the buying team is doing, we focus on getting them to say, “Yes” to us. Yet the project can fail, it a team member says, “No,” not to us, but in another aspect of the project.

Before you throw your hands up in the air, saying, “How do we manage something so complex,” there is some relief. Crassly, what we have to help the buying team achieve is not people saying, “Yes,” rather avoiding “No’s.” For example, some members of the team could care less about the vendor choice. It may not impact them or mean nothing to their work. We don’t need them to say “Yes,” to us.

It’s not our responsibility to resolve all the “No’s,” particularly in areas that are not impacted by the vendor decision. But it’s important that our customers recognize this, manage these within their consensus building process. We might coach them in the process of building and maintaining consensus. But we may not be the people that must resolve this.

And then, we have to think about what has to be resolved. We tend to think consensus is everyone saying “Yes.” The reality, is it’s just the avoidance of “No.” There may be a huge number of issues, where people involved in the project just don’t care, nor to they need to care.

Thanks so much Brian!