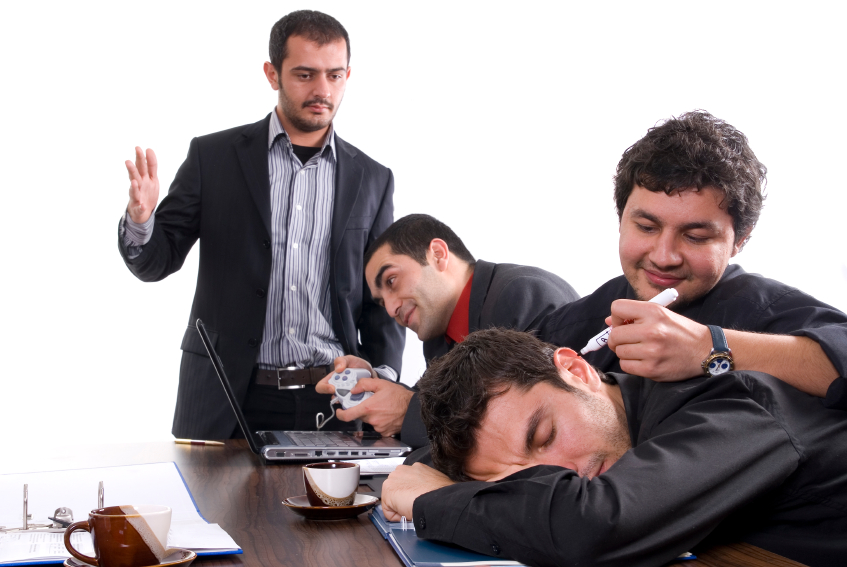 I read an interesting post by Geoffrey James, Stuck In A Boring Meeting, 6 Ways To Be Productive.  Before, I get on my high horse, I have to admit that I’m guilty of virtually every technique he outlines (plus a few more).  As much as I try to fight it, too often, I have horrible meeting habits.

Usually, in face to face meetings, I’m engaged–though often, it’s a struggle.  I shut my computer, I don’t let my attention get diverted to my smartphone, I do the best I can to remain present and an active participant.  Conference calls, web-conferences are more difficult.  It’s so easy to get diverted to email, Twitter, and so forth.  We feel less guilty, because no one else sees.  We rationalize, that everyone else is doing the same–often even the person running the meeting.

We get stuck in too many senseless meetings.  But “escaping,” as Geoffrey suggests (except for his Redirect tip), means that we become part of the problem of bad and boring meetings.  By not being present, by not being actively engaged, we are complicit in creating bad/boring meetings.

The “productivity solution,” is not the techniques Geoffrey has suggested, or the others that I’ve invented myself.  The productivity solution is for each of us to take responsibility, being present and actively engaged in every meeting.  If the meeting isn’t accomplishing anything, by being actively engaged, we can redirect it, we can hope to create meaning an value in the meeting, we can hope to actually accomplish something.

As participants in any meeting we have to take responsibility for the quality and value of the meeting.  That starts before the meeting.  For meetings we are running, we have to first ask ourselves, “Do we really need to meet for this? Can it be handled more effectively in some other way?”

If we must meet, then we have to put together an agenda for the meetings, making sure everyone understands the objective and goals of the meeting, and to make sure everyone is prepared.  I like to circulate meeting materials beforehand, so we spend less time presenting and more time discussing the critical issues.  Set the expectation before the meeting, that everyone is expected to be prepared–even with customer meetings.

It’s also important to have the right people at the meeting–just the right number, the right participants, no hangers on.

In the meeting, set some ground rules upfront.  I’ve been to a number of meetings, recently, where there is a basket on the table, all mobile devices go into the meeting.  If someone is using their device, politely invite them to put it away, and to be actively engaged, or suggest they leave the meeting, since what’s happening on their device is clearly more important.  If notebooks/laptops are required make sure people are using them for meeting purposes and not others.  If what they are doing on their laptop is more important, invite them to leave.

Politely “inviting” people who are not “present” (ie those exercising Geoffrey’s suggestions) puts interesting social pressure on them.  As much as we hate boring meetings, we hate being excluded from meetings even more.

Start the meeting on time, always.  It is the responsibility of the participants to be there on time.  Keep the meeting short and to the point.  If it doesn’t occupy the allotted time, adjourn early, people will treasure the found time.  End the meeting at the appointed time, always!  Respect people’s time, drive integrity into your meetings.

I learned an important lesson a number of years ago.  I was presenting to the management committee for a large European company.  We had scheduled 45 minutes for the meeting.  It turned out I really needed about 50 minutes and hoped to entice them to stay an extra 5 minutes.  You can guess what happened, after 45 minutes, they all stood up and walked out.  That’s the only time it happened in working with that organization for several years.  It was an important lesson.

As participants in the meeting, we bear as much responsibility for the quality of the meeting as the person leading it.  Before the meeting, we need to question the necessity of it, is there a better way to accomplish the objective?  We need to insist on an agenda, read it, suggest changes, but most importantly, arrive prepared.  In the meeting, we have to be present, we have to be actively engaged and participate.  Checking out, using our mobiles, checking email is unprofessional, and a demonstration of your lack of respect for the time of every other person in the meeting.  If you are compelled to do this, leave the meeting–clearly you will not be missed, since you wouldn’t have been “present” anyway.

I appreciate Geoffrey’s post.  It reminded me of bad habits that I’m trying to break.  I’m good most of the time, but every once in a while lapse into bad habits.

What’s been interesting, the more I’ve adopted these good meeting habits, there seem to be far fewer bad or boring meetings.  (There are also far fewer meetings, which is just as good.)