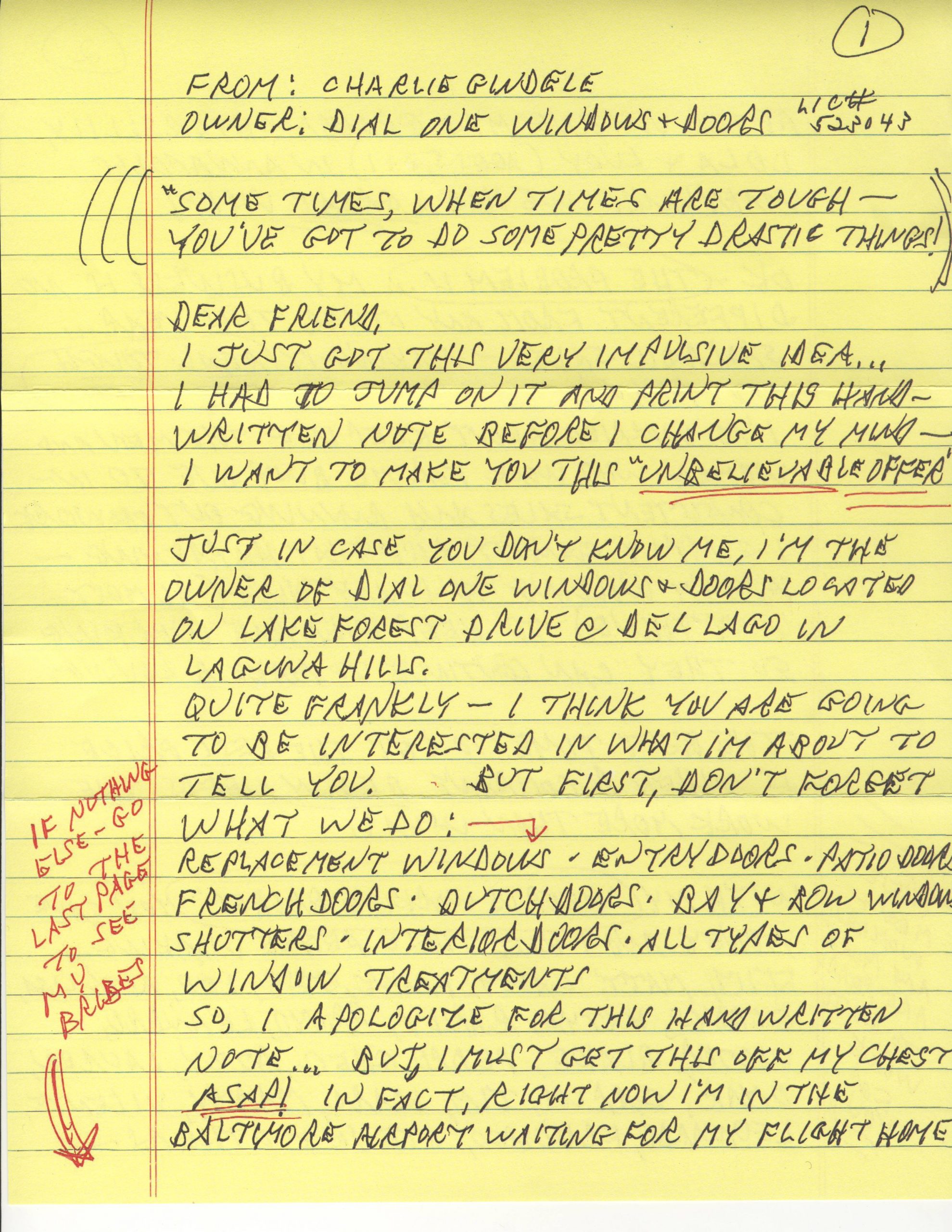 I’ve been tracking some discussions about old school approaches to engaging customers.  There are a number people talking about the power of handwritten thank you cards and notes (I’m a real fan of this myself).  One of my clients has done a study and has found brief handwritten introductory prospecting notes, with hand addressed envelopes are very effective.  For select prospects, they send well researched and handwritten notes–unique to each individual.  These are never more than a few paragraphs.  They seem to have high impact and generate good responses.

Leave it to some clever direct marketer to take this to an extreme, now taking something that had roots in authenticity, using the approach to manipulate and deceive the targets.  The other day, I picked up the mail, I opened an envelope and saw this handwritten letter.

I have to admit, they achieved one objective–they got me to read the letter–not only once but 4 times.  While I read it 4 times, mostly in sheer amazement, each time, it made me angrier because I recognized I was being manipulated.  The letter appeared to be from a frustrated small business owner, doing whatever he could to generate business.  “When times are tough, you’ve got to do some pretty drastic things!”  His impulsive idea was to send this “handwritten letter.”  He was so excited, he had to “hand write a note”  He clearly wanted me to know it was handwritten, because he reminded me of the fact at least 3 times in the 4 page diatribe.  He also managed to tell me the name of all his employees, who would appreciate my business to keep them employed, and the names and ages of his granddaughters.

He kept reinforcing the excitement, urgency, and his unique approach with notes in the margin, liberal cross through’s on words misused (purposefully), red ink arrows pointing me to his “bribes.”

The first time, I read the letter, I was amazed–I only read it out of professional curiosity, it seemed incredible.  Then in re-reading, the manipulations started popping out.  It became obvious that it was professionally printed, not handwritten (I think the font is Copperplate Sloppy Unreadable Bold).  I’m trying to find the download site.  The pages had gone through a folding machine, the envelope had presorted bulk mail postage.  I called my neighbors, they had gotten the same letter.

So what’s the bottom line?

If the objective was to get me to read the letter, they achieved it.  This is the first time I ‘ve received a note like this, I won’t be so easily fooled the next time–I might even accidentally ignore a real letter.

If their hope was to elicit my sympathy for a struggling local business person and take advantage of a deal, not only would I not respond, but I would never consider this company as a supplier (I was actually interested in what he was offering, but now he is not on my list of companies I am getting bids from).  The entire premise of his very first letter to me was a deception.  I guess I must expect the same from everything else he might do.  In the very first business encounter, he has proven himself totally untrustworthy.

I continue to be amazed.  It doesn’t take a lot of scrutiny to see the manipulations, they leap off the page.  But I get at least half a dozen of these every week.  I respect someone trying a clever approach to catch my attention.  But lying and manipulating?  I guess there are enough stupid people that make these techniques have some sort of pay off.

I’m longing for a kinder, simpler approach.  Perhaps a simple letter:  “I noticed the windows in your house are getting a little old.  I have an idea on replacing those, while saving you a lot of money.  Would you be willing to talk for a few minutes?”