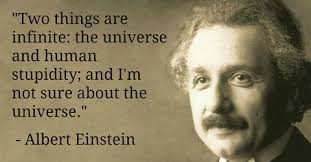 I’ve been writing a number of pieces looking at the future of the sales profession.  I’d be remiss not to include a discussion of stupidity in selling.

Stupid works, and as long as stupid works, we will continue to see organizations invest in doing things stupidly.

Stupid behavior exists everywhere, and selling is no more immune to stupidity than every other sector.

People respond to stupid emails.  After all, people purporting to be Nigerian Princes are making money.  There will always be some people that will respond to scams.  And enough respond that the people exploiting these tactics to make money.

While that may be an extreme case, people will respond to bad emails, bad phone calls, bad pitches.  They respond out of their own ignorance of alternatives, out of inexperience, out of haste, distraction, or for any number of other reasons.  As long as “enough” respond, sales people will continue to leverage those stupid tactics.

As these techniques don’t produce enough, the easy answer is “crank up the volume.”  Just do twice as many emails or twice as many phone calls.  Managers will go to their management, with the argument, “Here’s what we’ve produced in the past, if you just enable me to double, triple, I can produce more……”

Too often, we continue to do stupid things, thinking it was because of what we’ve done, rather than in spite of what we have done.

Customers will, and should, take advantage of stupid.  If they have determined the product will solve their needs, despite how they’ve been sold, it’s usually very easy to exploit stupidity to get the best possible price.  Be careful here, I’m not saying that sales people, even great ones, don’t have to discount.  But usually, this is a considered decision or after they have exhausted everything else.  Stupidity enables discounting, as a standard, because they don’t understand value or don’t value what they sell.

Some times smart organizations do stupid things, just look at the bad emails in my Inbox.  These, usually are corrected–it may take some time for these stupid things to get the right visibility.  Sometimes, they run under the radar for a long time, but eventually, they get visibility to people who recognize what it is, stupid.

Stupid is sustainable only in organizations that are driven by performance.  At some point, in any performance driven organization, stupidity reveals itself to be a low performance strategy.  But despite, the lip service of many executives, many organizations just want to get by.  So stupid can thrive in those environments.

While stupid works, it doesn’t work as well or as profitably as smart.

Stupidity will always have a place in sales, hopefully, it will always be threatened and, over time, represents a smaller percentage of sales behaviors.

Having said this, stupid is uninteresting and a waste of thoughtful people’s time.  Yet it’s amazing how many smart people get sucked into discussions driven by the stupid–you can’t fight stupid or argue with the stupid.  You just crush it not being distracted by stupid.

I’m surprised I’ve invested about 613 words in this  (perhaps I’m being stupid).

Afterword:  Thanks to Dr. Howard Dover for provoking this idea.